"What, Me Worry?": Local Party Officials Slow to Criticize Trump for Reaction 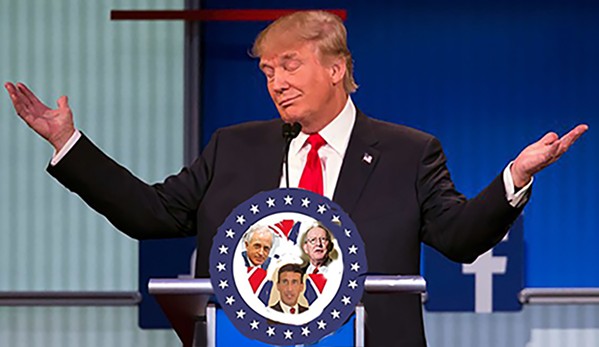 In the wake of the events last weekend in Charlottesville, Virginia, in which self-avowed white nationalists led a violent protest of the city’s intent to remove a statue of Robert E. Lee, and a woman was killed by a neo-Nazi who drove a car into a crowd of counter-protestors, President Donald Trump’s reactions became a focus of controversy.

At first Trump seemed to express a sense of moral equivalency regarding the two groups, then corrected himself, then, to increasing public dismay, doubled down on such sentiments in an impromptu press conference on Tuesday..

The President’s actions generated a good deal of pressure on his Republican partymates and GOP officials elsewhere to make more explicit their original, somewhat generalized statements deploring the events in Charlottesville.

On Wednesday, Tennessee’s two Republican U.S. Senators, Lamar Alexander and Bob Corker, and local 8th District GOP Congressman David Kustoff, all issued statements clarifying their views, making more specific reference than earlier to the hate groups considered to be the source of the violence but, in all cases, shying away from any direct disapproval of the President.

“We know that our nation has had a rough several days after the events in Charlottesville this past weekend. Make no mistake – White Supremacists, the KKK, neo-Nazis and all groups that preach hate, prejudice, racism and bigotry have no place in our country and must be explicitly condemned. As a United States Attorney, I prosecuted federal hate crimes. I strongly encourage the Department of Justice to follow through on the investigation from last weekend’s events.”

“Neo-Nazis and white supremacists, like any racists, tear apart the American character. They deny that we are all Americans, without regard to race, creed or background.

U.S. Senator Corker, at an impromptu Wednesday press conference of his own:

“Every day I go down to vote and [there are[ numbers of reporters down there waiting to ask questions, many times about tweets and those kinds of things.. Look I don’t respond. Okay? I just don’t respond. I respond for myself. I think what happened in Charlottesville was repugnant. White nationalists, white supremacy groups have no place, to me. They obviously have fundamental rights to peacefully, peacefully, express their views, but what happened when one of their members drove a car into a crowd, that was terrorism, I couldn’t agree more.

“I don’t respond to someone else’s comments. I speak for myself, and I’ll let others editorialize about other people’s comments.”

Corker, who chairs the Senate Foreign Relations Committee, was also asked about budget cuts indicated by Trump for programs countering what the reporter called “domestic terrorism, including white nationalism”:

“For people who have fears, Congress spends money. Okay? Congress never pays attention to a President’s budget. Okay? I mean, it’s nice to look at, [but] again,I haven’t even read the President’s budget.So don’t be concerned about what’s getting cut or whether the State Department’s going to have this happen or other departments….It’s just not a factor in what we do….”